Over the course of the last two football seasons I have played with some pocket change on Bovada.lv. It’s a website where you can bet on the lines of NFL games to MLB games to The Oscars (seriously). Over time I have had a lot of fun making bets. I usually partake in betting on straight lines, but I’ve also been known to get involved in other kinds, including sweetheart teasers.

What is a sweetheart teaser?

A sweetheart teaser for the most part plays out the same way as a regular teaser, except a sweetheart gives the bettors even more points. You can shift the line by 10 to 13 points in football (that’s nearly two touchdowns). There are a couple of differences. While regular teasers can include up to 10 teams, a sweetheart can include only three or four teams. Also, if any of your selections push on a sweetheart, you lose the entire bet.

Also, check out this link to gain a better understanding of the NFL spread betting.

As you can see, sometimes the gamble can be quite large when betting a teaser. Who doesn’t like a good risk once in a while? From this week forward, I am going to outline some of the bets I love, hate and my sweetheart teaser of the week!

Cincinnati Bengals + 7 ½ (-115): The Saints haven’t been good at football all season. The Bengals were coming off some recent struggles but the line was too high for a team that just wasn’t playing well either. The Bengals took it to ’em and cleared another great bet.

San Diego Chargers – 10 ½:  This is a bet I was avoiding, but the Chargers came through and helped me make it a 3 for 3 week.

Sweetheart Teaser: This played out exactly how I anticipated. The Seahawks at +7, Raiders at +16 ½ and the Patriots at +9. I love betting sweetheart teasers, especially in weeks like this where they cleared completely.

Overall, I was 4-0 in my bets last week and look to carry that success into week 12!

Gut call here. Washington is God awful as we saw last week against Tampa. The 49ers defense is much better and they should smoke the ‘Skins in week 12. Always go with your gut!

The other side of this line is being bet on heavily, as the -7 for Arizona is at -130 now. It’s understandable, as Seattle clearly isn’t the team it was a season ago. The Cardinals have been fantastic all season long. However, I don’t expect them to go into Seattle and beat the Seahawks with Drew Stanton at the helm. After a tough loss to Kansas City last week, I think Marshawn Lynch and company blow out the birds.

Yep, I’m picking on the Saints again this week. They are a 3 and a half point favorite against a better Ravens squad. It’s the dome factor, obviously. If the line was right at 3, I would not be as excited to jump on this bet. However, if the Saints do pull off a win, I think it’s by a field goal.

There’s always a chance this game won’t be a blowout. I don’t like the bet. I’m not telling you not to make it, just not one I’m investing in this week.

My sweetheart teaser lock of the week: 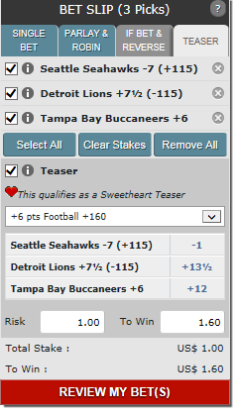 We’ve already talked about the Seattle bet, and getting it at -1 is even sexier.

The Lions face a red-hot Patriots team in New England this weekend. The line is large because it will take place in chilly Foxboro. However, the Lions defense is legit and they can really rush the passer. If they can get to Brady, they have a shot to win. Even if they don’t though, I can’t see them losing by two touchdowns. I love the 13 ½ I’m getting. Sign me up.

The Buccaneers showed up last week and shut down the Redskins, but they have a tougher task in week 12, and that’s the Chicago Bears. The Bucs are also 4-1 against the spread on the road this season. Chicago is going to win this game but I can’t see them just destroying Tampa. With that, they are the third team in my teaser.

Ricky is a co-owner, fantasy sports writer and gambling man at The Sports Script. Follow him on the Twitter machine @rickygangster!