Over the course of the last two football seasons I have played with some pocket change on Bovada.lv. It’s a website where you can bet on the lines of NFL games to MLB games to The Oscars (seriously). Over time I have had a lot of fun making bets. I usually partake in betting on straight lines, but I’ve also been known to get involved in other kinds, including sweetheart teasers.

What is a sweetheart teaser?

A sweetheart teaser for the most part plays out the same way as a regular teaser, except a sweetheart gives the bettors even more points. You can shift the line by 10 to 13 points in football (that’s nearly two touchdowns). There are a couple of differences. While regular teasers can include up to 10 teams, a sweetheart can include only three or four teams. Also, if any of your selections push on a sweetheart, you lose the entire bet.

Also, check out this link to gain a better understanding of the NFL spread betting.

As you can see, sometimes the gamble can be quite large when betting a teaser. Who doesn’t like a good risk once in a while? From this week forward, I am going to outline some of the bets I love, hate and my sweetheart teaser of the week!

Saints -6: Seriously the Saints go ahead with less than 2 minutes to go in the 4th and I’m ready to jump for joy as my sweetheart teaser is going to be 2 for 2! And them boom, Colin Kaepernick completes a 50-yard pass to Michael Crabtree, setting up the game-tying field goal. After that, the rest was history. I always bet the Saints at home, ugh.

Ravens -10: I won’t lie, I was a little nervous about this game and wasn’t sure we would get the cover. A late touchdown secured this bet though, making me a happy camper.

Steelers – 6: I talked this up all week everywhere! Trap game. I loved the Jets getting 6 points against a hot Steelers team. The masses have short attention spans. Recency bias, anyone? Sure, Pittsburgh had been on fire over the past couple of weeks, but they have been bad against teams with records below .500. The Jets actually ended up winning outright.

Sweetheart Teaser: The Jets did their part in this and the rest was just a disaster. The Saints blew it and the Panthers got murdered! Very sad day for the teaser.

Overall, I was 2-1 in the matchups but my teaser fell down for the week.

Week 11 is upon us and there are some very interesting matchups. Let’s dive right in; cannonball!

Can someone please explain to me how the Washington Redskins are favorites by 7 points against anyone in the National Football League? That makes no sense and I am going to pounce on this game. I really don’t think Tampa is as bad as their record would tell us. This is what I like to call an easy money bet.

When the Bengals lose, they really lose. In their 3 losses, they’ve been outscored 84-20. Yikes! Still, a 7 and a half point spread is enticing. The orange and black have some fast, talented players, meaning the Saints’ 24th ranked pass defense will be on notice. This spread is too high in favor of the home team.

This bet will probably see a lot of action in favor of the Chargers but I think this Raiders team is going to play spoiler down the stretch. Oakland is 3 and 1 against the spread on the road this season. This smells like a trap game to me.

I don’t like either side of this bet. Either team could come out and win. It’s hard to know which 49ers team will show up any given Sunday and the Giants have just had an odd season. Steer clear.

My sweetheart teaser lock of the week: 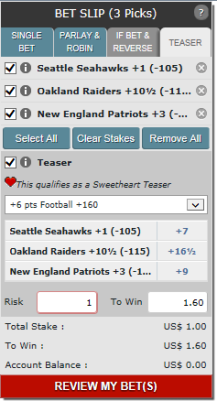 So you already know about my love for the Raiders this week, so let me talk about the other 2 bets on this week’s sweetheart teaser.

That’s a very confident teaser for me this week. So lets roll the dice and make some money, folks.

Ricky is a co-owner, fantasy sports writer and gambling man at The Sports Script. Follow him on the Twitter machine @rickygangster!