Thoughts on the 2nd Debate 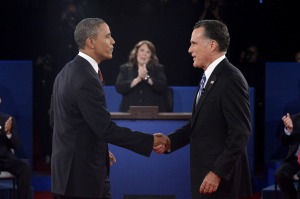 After watching the 1st debate and seeing Governor Romney just take charge of the President. I was looking forward to see how President Obama would react and see if he would come out guns blazing. Here are my thoughts on the 2nd debate that went down last night.

1. We had a much stricter moderator this time, Candy Crowley. Though people have complained for siding with the President on multiple occasions. If anyone saw the 1st debate we saw a terrible excuse of a moderator let Romney run over him. Though she came off on his side, she was much more strict than Jim Lehrer.

2. President Obama was much more confident last night. Bringing out the guns and actually at times got a bit of an attitude towards Mr. Romney. I liked his approach way more this time than last. Felt like he was more confident in what he was saying and was ready. I still believe that he was caught off guard by Romney in the last debate.

3. Romney didn’t seem as confident this time. Flubbed over his words a bit more this time than in the last debate. I thought he had a strong chance to prove that the 1st debate wasn’t a fluke. He failed to show us anything of what we saw in their 1st encounter.

4. Romney made a huge mistake in mentioning the 47% in his closing statement. By saying he would look out for 100% of america. Then the final words by our President, he came out swinging. Delivering an amazing speech that was heart-felt, sincere and true. Then he just I think finally put the nail in the coffin of Mr Romney. Mentioning the statement he made behind close doors about that 47%.

I thought Romney easily beat the President in the 1st debate. But like the 1st, President Obama back against the wall came out swinging. And clearly won this debate, the last words by the President I feel sealed his victory.

So I am keeping score, President Obama 1 – Mr Romney 1. With the last debate coming on Monday.

Make sure folks you go out and have youre voice heard. Go out and Vote every vote does in fact count. Whether you are Republican, Democrat or an Independent it is very important to vote. Also my mother once told me, “you don’t vote, you can’t complain”. I as well stand by that statement.