In the midst of thinking that middle infield would be a tough position to forecast in 2014, three middle infielders made the top 20 on ESPN’s Player Rater. However, it did not include top-twelve selections Robinson Cano, Troy Tulowitzki or Hanley Ramirez. This seems to be carrying over to early ADP’s as people are reacting to the strong performances by Jose Altuve and Anthony Rendon who finished 1st and 17th respectively last season. Early on, each player is being taken in the top 15 in NFBC money drafts. The third player to finish in this company was Dee Gordon, who is not enjoying the early love as his other brethren due to questions of regression. But is Gordon really that much more of a question mark than the other two? That remains to be seen. At first glance, second base seems much deeper than in the past.

As for shortstop, rankings always begin with Troy Tulowitzki. This is not a knock on Tulo (or maybe it is), but he has averaged just 105.8 games played over the last five seasons. If you select him with eyes wide open, that is fine, but even with less than 100 games in 2014, Tulowitzki still finished 8th on the Player Rater at his position. It seems like Hanley Ramirez falls under the same category, but he will be learning a new position in Boston. HanRam has averaged 121 games over the last five years, but should see a bump in production playing in Boston if he can handle playing the outfield. Add in Jose Reyes and you have an instance in which three of the top four ranked shortstops are a risk for injury. While everyone is an injury risk, the checkered health of this talented trio makes it difficult to draft them since it comes at a cost that is rarely returned. Dee Gordon finished 2014 as the top fantasy shortstop but will not retain eligibility this year. Let’s transition to the average draft positions at second base for 2015 in NFBC money drafts:

I was a proponent of Jose Altuve last year and enjoyed the returns of owning him in my home AL-only league. While I think he can repeat some of his numbers, it stands to reason that he will regress a little in 2015. Batting average is the hardest statistic to predict so when it is one of the main reasons driving a player’s value, that makes taking him in the first round risky. With the dearth of power in the league, I find it hard to justify taking a base-stealing second baseman in the top 10. I also loved Anthony Rendon as my editor will be happy to tell you (Editor’s note: It’s true, he did). But with Rendon being taken at pick number 14 that again neutralizes his value. I think he is very talented and capable of repeating his numbers in 2015 but his home run tracker lists 12 of his 21 home runs last year as “just enough”. What if half of those do not go over the wall this year? That drops him home runs from 21 to 15 which is worth making note of. Meanwhile, Seattle signed Nelson Cruz for Robinson Cano. This is very important since Cano has had little protection since moving to the Mariners. I think he is due for a big bounce back season and with his ADP slipping into the twenties, now is the time to pounce. Two other players I like this year are Jason Kipnis and Kolten Wong at their present draft spots. Kipnis’ power numbers are limited by an inability to hit fly balls, but all he needs is health to rebound. Wong had a strong finish to 2014 and looks to build upon that this year. Like the blind profile with projections, here are some interesting ones courtesy of Steamer:

It is easy to see that player B has a noticeable drop in runs scored and just 9 points in batting average, but he is going to be an interesting player to watch develop. While I prefer player A in drafts, if he is taken ahead of where I want him, player B is an intriguing fallback option. Here is one more comparison:

While two of the players above are now teammates, it will be interesting to see how their at bats work out. The third player in the comparison really came on in 2014 and looks to build upon that this year in anonymity since he is not going in the top 200 thus far. Here are the their identities:

Projections do not tell the whole story but when the names are taken out of the process, it allows us to look at them objectively. Other players of note are Chase Utley, Jedd Gyorko, Nick Franklin and Rougned Odor. Second base is not a fantasy gold mine, but it is definitely as deep as it has been in recent memory. Here are the steamer projections of the players taken in the top 200:

Due to the ADP’s in clear tiers, drafting shortstop will depend on an owner’s preference. Those who want a premium player at a volatile position will be taking Troy Tulowitzki, Hanley Ramirez or Ian Desmond in the top 30. After that though it is sort of spread out. Only two shortstops are being taken between picks 50-100 but then five go off the board between picks 105 – 138. Almost a whole round lapses then four more shortstops are being selected between picks 150-180 in the NFBC top 200. Here are the players with their ADP’s included:

As much as shortstop will be in transition, especially with the move of Hanley Ramirez to the outfield in Boston, there is hope. Continuing the blind profile exercise, here are some interesting ones I found using the Steamer projections:

Only one of the above players is being taken inside of the NFBC’s top 200 in money drafts. Showing that while there is depth at shortstop, it seems as though there are many at the same statistical level. Continuing on that theme, here are three more in the same exact circumstance:

There aren’t many discernible differences in either group. Player A does have a big advantage in batting average which enhances his value but that is also the one statistic with the largest variance. In the second group any one of the three players listed could out-produce the other with a bump in one category. Curious?

Only Starlin Castro and Jhonny Peralta are being drafted inside the top 200 but I think those picks are better spent on pitchers or players with more upside than guys like Peralta. There are plenty of similar options available. Before I forget, here are the Steamer projections for the shortstops inside the top 200: 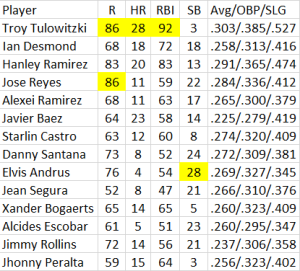 Intriguing undrafted shortstops include Erick Aybar, Chris Owings and Alcides Escobar. I can see a bounce back by Jean Segura who endured a very tough season not only in his adjustments, but personally as well. Danny Santana is due to regress but how much? If he can steal 20 bases and score 80 runs then he still has value. Yes his average will drop to the .270 range but it depends on need. Javier Baez will be a very tough player to own since he will be streaky and may not break out until the second half. I think he is talented but to reach for him at pick 106 would be unwise. There are options if you do your research, just do not wait too long or you will find yourself with Jed Lowrie.

Middle infield will have depth and some value to share this year. I think you can be successful without reaching or paying for career years. It will take patience but early knowledge of how players are being valued helps determine where to get them. Tomorrow I will take a look at the outfield.

If you think there is variance in the middle infield, just wait.