When the Marlins signed Giancarlo Stanton to an extension it changed the direction of their offseason. Instead of playing for the future the Marlins are going for it, as echoed by quotes from Stanton, courtesy of USA Today:

“Stanton told USA TODAY Sports that he was always willing to listen about a long-term extension, but simply wanted assurances that the team is committed to winning.
‘Winning,” Stanton said, “has a way of curing a whole lot of things.’’

Indeed, winning is the cure. This has happened before with the Marlins as they seem to build with youth to contend, win and then sell off the parts before they become too expensive. There is an opt-out clause in Stanton’s contract that the team feels he will take so the window to win has been shortened even with the agreement in place. In an effort to fill gaps within the pitching staff until Jose Fernandez returns from Tommy John Surgery, Miami added Jared Cosart last August along with the following changes this offseason:

On the surface this is about improving the infield and the offense. Even though Stanton hit 37 home runs prior to his season-ending injury, the Marlins as a team only hit 122 in 2014. Unlike the Padres, the Marlins have a strong base to build around in the outfield which is why they turned their focus to veteran pitching depth and improving their lineup. Here is a chart showing what each spot in the lineup produced in 2014. These spots will likely be filled by the aforementioned Prado and Morse:

While the counting statistics will likely be the same for Prado, his career slash lines of .291/.340/.429 are an improvement over what the Marlins had there last year. Hitting in front of Stanton is an enviable place to occupy in any lineup. In Prado’s career he has hit .297 against fastballs and figures to see plenty of them if he hits second. As for the cleanup spot, Stanton had Casey McGehee hitting behind him for most of 2014 and still produced 37 dingers, so this is more about Michael Morse hitting in a better spot in the lineup. Which Dee Gordon are the Marlins getting? Considering that they stole only 58 bases as a team last season, Gordon figures to give them a new dimension even if there is regression in his on base numbers.

As for the pitching side, the Marlins did give up the second-rated left-handed pitching prospect in the minors when they moved Andrew Heaney to the Dodgers in the Gordon/Haren trade. This is a high risk, high reward scenario for them because there is no guarantee Dan Haren pitches in 2015. Not only that, but they dealt Anthony DeSclafani to the Reds in return for Mat Latos who is coming off of a disappointing and injury filled 2014. If Latos cannot regain his fastball velocity and ends up needing further elbow surgery, then this could all blow up.

Here’s a look at what Gordon, Prado and Morse have done over the past two years, (for Gordon I used 2012 and 2014 due to his limited 2013) along with their Steamer projections, courtesy of Fangraphs:

I think that Prado is capable of scoring more runs since the number two hitters in 2014 were able to cross the plate 82 times. Gordon will regress towards the slash lines but I still think he is capable of 90+ runs and 60 stolen bases. The only question with Morse is health. If he can stay off the DL, there is a buy-low opportunity there. I can see a stat line of 20 home runs and 70 RBI this year if he can play 130 or more games.

Miami felt it needed to add a veteran pitching presence and has taken a chance on two pitchers who are coming off of mediocre years and declining velocities. Haren is dealing with the velocity decline with success, although he is prone to blowing up on occasion. According to BrooksBaseball.net, Haren has lost 2 MPH on his fastball and has moved to using his cutter more, especially near the end of 2014: 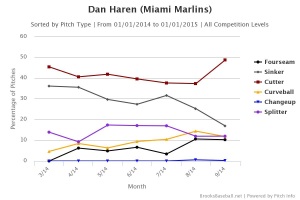 Latos had a 2014 that he probably would like to forget. Coming off of an elbow procedure to clean up bone chips and promote bone growth, he also had a knee problem. It’s blatantly obvious that Latos was never comfortable last year. What is more disturbing is the drop in his 2014 K/9 (6.5) and the loss of velocity in his pitches. Again, here are Latos’ career velocity charts along with the same pitches and speeds from 2014 (courtesy of BrooksBaseball.net):

If Latos cannot regain his fastball speeds in 2015, it may be a long one for the fantasy owners who are buying a return to form. The following charts illustrate how important it is for Latos to use his slider, curve and split finger. His fastball and sinker are too hittable for him to pitch effectively without using his full arsenal:

I find it remarkable how similar the two players Steamer projections are for 2015 considering one is 27 and the other is 34:

Ultimately, Latos’ elbow health and velocity in Spring Training may determine his worth for 2015. As of this writing, the Marlins definitely took risks to keep their franchise player happy. A lot will have to go right for the Marlins to make the playoffs in 2015, although with the turmoil surrounding the Phillies, Mets and Braves, they have given themselves a shot at the Wild Card. If Haren decides to walk away from his contract or Jose Fernandez has any sort of a setback, the Marlins could be in tough shape.