While talking to my son the other day I told him a story about how the only day of high school I missed was to sleep overnight to get my Dad tickets to see his favorite artist, Bob Seger and the Silver Bullet Band. Of course, his first question was “who is Bob Seger?” So I explained, saying that he had no relation to Kyle Seager. My son plays baseball and loves it, but gave me the same look. “Who is Kyle Seager?” Fantasy owners seem to have the same question. The problem here is that Kyle Seager plays in the Great Northwest and is probably still overshadowed by the old guard at his position. Entering 2014 drafts, Seager was the 11th third baseman selected at pick 106, or only 25 spots after Pedro Alvarez. If you were fortunate enough to draft Seager, he rewarded you with a 7th place finish on the ESPN Player Rater.

What Kyle Seager lacks in sexiness, he makes up for in consistency. He has played an average of 158 games per season since 2012, and with all of the inconsistent performers at third base, this is a welcomed trait. Here is the average of his last three seasons:

Seager made strides last year, especially in his RBI total:

It’s surprising that he had his best homer total in 2014 considering his home run distance and speed off the bat have trended downward. Here are his first three full seasons according to ESPN’s home run tracker page:

While the speed off the bat has only seen a slight dip, the distance drop of 18 feet can be a bit concerning. Seager still smacked 25 homers in 2014 and his stats paint the picture of an upward pointing arrow. He just turned 27.

Even though Seager’s average home run distance has dropped, his home run per fly ball percentage has risen over the last 3 seasons. If Seager can push his OPS over .800 he is in line for another career year. If he puts together a year of hitting well on the road and at home, this is easily possible.

He has been able to hit away from Seattle in his first 2 seasons but struggled on the road last year. His home statistics last year prove he can thrive in a tough ballpark environment. Two things could really allow Seager a real breakout in 2015: hitting well on the road and using left field for more power. Seager has only hit 1 career home run to left field, though he does use that side of the field. First here is his career spray chart:

Nine of Seager’s 27 doubles were to left or left-center and so were two of his four triples. To avoid a shift and push his home run total toward 30, Seager will need to use the opposite field for power. His zone profile suggests this is possible. Here is his career slugging zone profile: 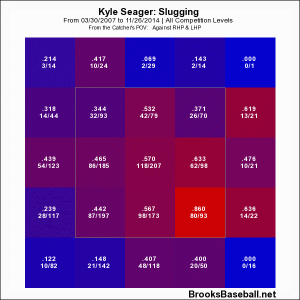 On pitches middle and away Seager slugged .552 last year. On offerings in the top third of the strike zone and outside he slugged .429. It appears that Seager is on the cusp of a small but profitable breakout. Seattle acquiring another viable power bat would really cement this. Although he hit .293/.356/.503 in 40 games as the cleanup hitter, how nice would a right-handed power bat look between he and Robinson Cano? It appears that the Mariners are trying to make this happen and if it does this should move Seager up in preseason rankings. I definitely see Seager as a top-five option at third base and will be taking him over the likes of Evan Longoria, David Wright and Josh Donaldson moving forward. While Pablo Sandoval will be getting all the hype moving to Boston, Seager keeps doing his thing in gloomy Seattle. To this day, sharing that concert with my Dad was a top-five show for me as I got him seats in tenth row center. Maybe after reading about Kyle Seager some of you will accompany me on his bandwagon. Seattle will be doing well to lock him up for 2 more years than Panda for the same price. Get your tickets in 2015, this may be the last time to get Seager this cheap.