According to the dictionary, the definition of a perfect storm is as follows: a particularly bad or critical state of affairs, arising from a number of negative and unpredictable factors.

Anyone who watched the Mets offense last year is aware of the critical state of affairs, but there were predictable factors. In 2014 the Mets finished below the National League average in slash lines with a .239/.308/.364 showing. Their 629 runs finished 8th, 125 home runs 9th, 1,994 total bases 12th and their team OPS of .673 was ranked 11th. However, a winning blueprint has been established in baseball of late. Develop strong pitching, improve on offense and peak at the end of the season. If all that is done, it is anyone’s game. This is why the Mets have signed Michael Cuddyer to a two-year deal.

New York’s pursuit of Cuddyer can’t hurt. He’s a professional hitter who should help lengthen a weak lineup. Cuddyer can play some first base, too, which should help when they face tough left-handers. Cuddyer will probably miss some time, which is an obvious caveat, as he’s averaged under 94 gamers per season over the past three. When healthy though, the Norfolk, VA native has been a threat. He’s produced well in that cool Rocky Mountain air over the past three seasons.

Not reflected in the cumulative stats is the fact that his OPS (.886) and wRC+ (127) are numbers that the Mets front office craved. The nice thing about wRC+ (weighted Runs Created) is that it makes the stats even no matter where the player plays his home games. Over the last three years only six right fielders are ahead of Cuddyer in wRC+; Yasiel Puig, Giancarlo Stanton, Jose Bautista, Jayson Werth, Ryan Braun and Shin-Soo Choo. Cuddyer is ahead of fellow free agents Nelson Cruz and Torii Hunter along with Justin Upton and Hunter Pence. Will the move to Citi Field have an effect on Cuddyer’s power numbers? It absolutely will.

His career home/road splits reflect that:

It is very difficult to quantify what the change in ballparks will do to a hitter but I did take a look at the new dimensions of Citi Field and tried to do a park overlay using Cuddyer’s 2013 season. What these charts do not take into account is how differently the ball will travel in New York as opposed to Colorado. First, here are the new dimensions at Citi Field:

Here is the park overlay with the old Citi Field dimensions and Cuddyer’s 2013 season: 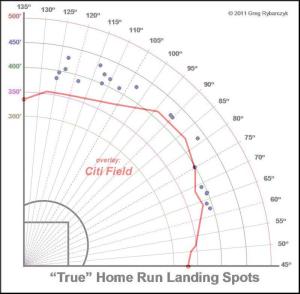 What we do know is that Cuddyer’s career slash line is .279/.347/.466, and he is a gamble the Mets were clearly willing to make. If the Mets could get that for a full season, they would be very happy. Entering the season at age 36, the two-year window should not be too hard for the Mets to make good on with their investment. If Cuddyer can get 480+ at bats, then the Mets with some more moves can make a run at the playoffs if their young arms hold together. However, this is just the first in what may be a flurry of moves for the run-starved Metropolitans. It will be interesting to see what they do with Daniel Murphy, Wilmer Flores and Dilson Herrera. One of them is bound to be moved for an upgrade at shortstop.

Some are blasting the Mets for this contract but it may work out. Losing the 15th pick in the upcoming draft is tough but the trade market may have been much more costly to the Mets farm system that is ranked as high as fourth by Keith Law of ESPN.

That is not a sexy line by any stretch, but one that the Mets would probably be pleased with. They tried to achieve this with Chris Young last year, but no dice. Michael Cuddyer has a much more established track record to rely on. With the perfect storm on the horizon, it is a calculated risk the Mets decided they wanted to take. Knowing that the above projected line is for Coors though, I think that the numbers above are too high. Since that would be a peak projection, I would pay for 15 home runs and 7 steals. Anything more is gravy. Cuddyer’s move to New York is better for him as a ballplayer looking to make one more run at the playoffs than as a boon to his career statistics or fantasy prospects. Just do not totally forget him on draft day.

Check out FantasyRundown.com for all the latest fantasy articles from around the web.