Stephen Vogt Has My Vote

Through the years the fantasy “Moby Dick” has always been owners trying to get a catcher who could provide offense while playing another position. While forward thinking gamers tried out Brandon Inge of the Tigers playing third base with catcher eligibility and most recently Ryan Doumit when he had catcher eligibility while playing in the outfield, another option is emerging in Oakland. With owners lamenting the losses of Matt Wieters and Yadier Molina, Stephen Vogt (48% owned on ESPN, 36% Yahoo, 57% CBS) deserves your attention. According to the ESPN player rater, Vogt is the third ranked catcher over the last statistical month behind only Devin Mesoraco and Salvador Perez. Here are his numbers over the last 30:

Because of his most recent promotion, his season long numbers are not much different. But with Oakland’s propensity to exploit matchups by using the platoon, Vogt is a player to speculate on. In the last five games prior to the All-Star break he batted in the two-hole in. If that is a sign of things to come then my interest in him is even more piqued. Batting second is a prime spot in the lineup and could provide a bump in runs, which for catchers is a rare stat. Remember another minor league castoff that has blossomed in Oakland, Brandon Moss? By no means is he another potential Moss because he does not have the power upside, but could Vogt provide 5 or more home runs in the second half without hurting a team’s batting average? Absolutely, here are his minor league slash lines:

Along with the nice batting averages, Vogt has displayed some pop in the minors with 29 home runs in 857 at bats. Even though he does not possess a high walk rate (4.3%), his strikeout rate has improved by three to (11.2%) in 2014. So a better command of the strike zone, a patient approach and an improved ISO (isolated power) tell us that Vogt is either on a heater or breaking through. His charts on BrooksBaseball.net are also encouraging. Here is his 2014 spray chart: 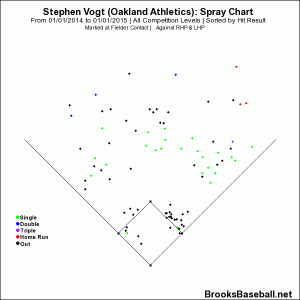 And his zone profile shows he can handle pitches across different levels of the strike zone: 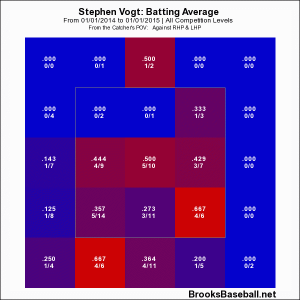 Vogt is 29 so this is probably not a keeper league decision but rather a potential year-long filler option. Often it is a small move like taking a chance on a player such as Stephen Vogt that gives you a quiet push up the standings. If you missed out on the breakouts by Mesoraco or Perez, take a look at Vogt. Fantasy owners never know when a player will finally reach his potential in the majors, those who believed in his teammate Brandon Moss may profit again by adding Vogt before it is too late.