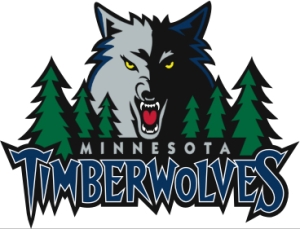 Welcome back to another edition of the NBA preview here on the Sports Script. Things are starting to get heated up as we delve further into the playoffs on both sides of the league, and we’re almost in that area of “True Contenders”, but we still have a few more teams before that point. Today’s team is a team that I’m super high on, and not too many others outside of their city are. They have a star, and top 10 guy in the league, and an excellent supporting cast, it’s time to talk about the Minnesota Timberwolves, or Wolves, whichever they preferred to be called.

What’s a defense? That’s the only reason I don’t think this team can contend on the highest level. They still don’t have one of those guys who can shut down the other team’s best player, or at least attempt to do so. But the Wolves still had a very nice offseason, finally adding a competent shooting guard in Kevin Martin. Martin will add some much needed perimeter scoring, and help defense play Ricky Rubio honestly, because seriously, that guy can make a pass to anyone, anywhere on the court, something Martin didn’t have last year in Oklahoma City. Corey Brewer comes over from Denver, and should add some defensive presence, but that comes at the cost of a very limited offensive game, and outside of some very easy shots, will be a very one dimensional player. Very. Shabazz Muhammed was once considered a top overall pick, but fell due to character concerns and a whole slew of other things, but I still like him. He has the talent to be a very good player, and being coached by Rick Adelman will be a very, very good thing for him. Andrei Kirilenko was the biggest loss this season, but he did open up $10 million in cap space, and that money was spent pretty wisely, and will be a massive help this year. And how could I forget about David KAHNNNNNNNNNN! the worst GM in the NBA ever since he first existed. Good riddance. But how could we forget about his decision to not keep Stephen Curry? If I could borrow a Bill Simmons’ staple…

The Wolves have a very potent starting lineup, and finally, FINALLY! Both Ricky Rubio and Kevin Love and both healthy, we hope. *knocks on wood. But seriously, Ricky Rubio may never be a complete offensive threat, but his passing is the best in the game, and will make a couple plays a game that make your jaw drop. This will help a great three-point shooter in Kevin Martin do great things this season, and same with Chase Budinger who is also a very nice three-point shooter. The Timberwolves have figured out the best way to contend is, and this is how the Heat have won two championships:

1. Have a superstar, Kevin Love in this situation.

2. Surround him with shooters and make your opponents play that star honestly, or DEATH BY THREE BALLS!

Did I mention Kevin Love? Yeah that guys pretty good at basketball. Not much else to say about him, other than he’s a dual threat down low and on the perimeter, great rebounder, and has the best cast around him in his career. But he’s on a somewhat short contract, so once again… KAHNNNNNNNNNNN! The final guy is Nik Pekovic, who I really love, and am totally terrified of, because he’s probably the most real dude in the NBA. Scary guy doesn’t cut it with him.

The Timberwolves finally seem to have everything in place to make a run into the playoffs, and even in a loaded top to bottom Western Conference, I have faith they play up to their potential. It’s just all about staying healthy, so once again… *knocks on wood. Stay healthy Minnesota, we want you to be good, and we want to see what you can do in the playoffs.